A Certain Distance is a solo exhibition of drawings, compositions and prints by Ross Hamilton Frew. The works on show are the accumulation of twelve months of research with Paper Studio Northumbria, at Northumbria University. During this period Frew investigated various methods of paper production in order to create a paper-stock made entirely from pulped books. This alongside miscellaneous examples of found and made paper make up the exhibition.

By stripping books, a process popular in 20th Century publishing where unsold books were stripped of their cover in order to be pulped and recycled, Frew plays on the symbolic imagery of destroying books in order to create new content. This action suggests the artist is interested in how we value knowledge within contemporary society and what role destruction can play in creativity. The act of pulping literature could be viewed negatively, yet within the industry it has the long term effect of diminishing the number of copies of a given publication and of making the surviving copies more valuable in the book collecting market. Frew’s literary sacrifices may go relatively unnoticed within this market, but the symbolism holds true. Frew shows his gratitude for this material and pays homage to the lost texts by collecting five and seven syllable sentences from these books to build haiku, perhaps repurposing the content to create new meaning. These haiku are turned into wall drawings and sit comfortably alongside the resulting paper works. The simple Japanese poem structure reflects the simple structure of the drawings and vice versa. The works are also not individually titled but rather grouped by their proximity to the haiku, thus emphasising the works as a body rather than a series of individual drawings.

The involvement of the hand in the paper making process introduces an artisanal element to Frew’s practice. However this is juxtaposed by the method of his drawing. Previously Frew has used a series of frameworks from which his work is derived, but has instead opted this time to allow the surface he draws upon to dictate the outcome. The produced drawing surface contains the speckled remains of the text that gave way for its production, and these markings provide the starting point for all the exhibited works. Frew’s straight lines connect the dots and build the foundations for all the exhibited drawings. This process of marking, erasing, shifting and building is mechanical in nature and by introducing the use of a photocopier to build on the texture of the speckled line, Frew balances the praxis between the handmade and the machine, the artisanal and the mass produced.

This is further emphasised by the title of the show ‘A Certain Distance’ which is in reference to the geometric term ‘locus’, which is a set of points whose location satisfies or is determined by specified conditions, such as equidistance. This alludes to an obsession with systems and structures within his practice and Frew is allowing that system to dictate how he makes his work. However, the inevitability of human error and the unpredictability of a hand made process give the drawing no other option than to forego any ideas of perfection. With this removed the emphasis is solely aimed towards creating new experimentation in contemporary drawing. 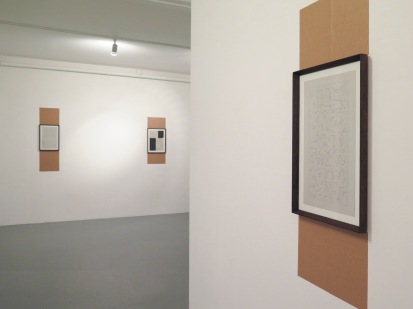 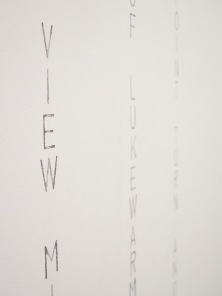 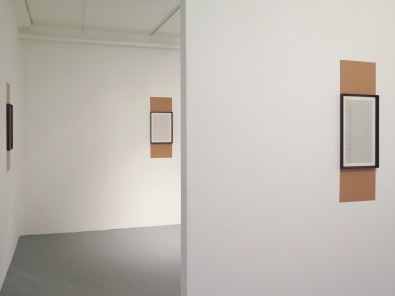